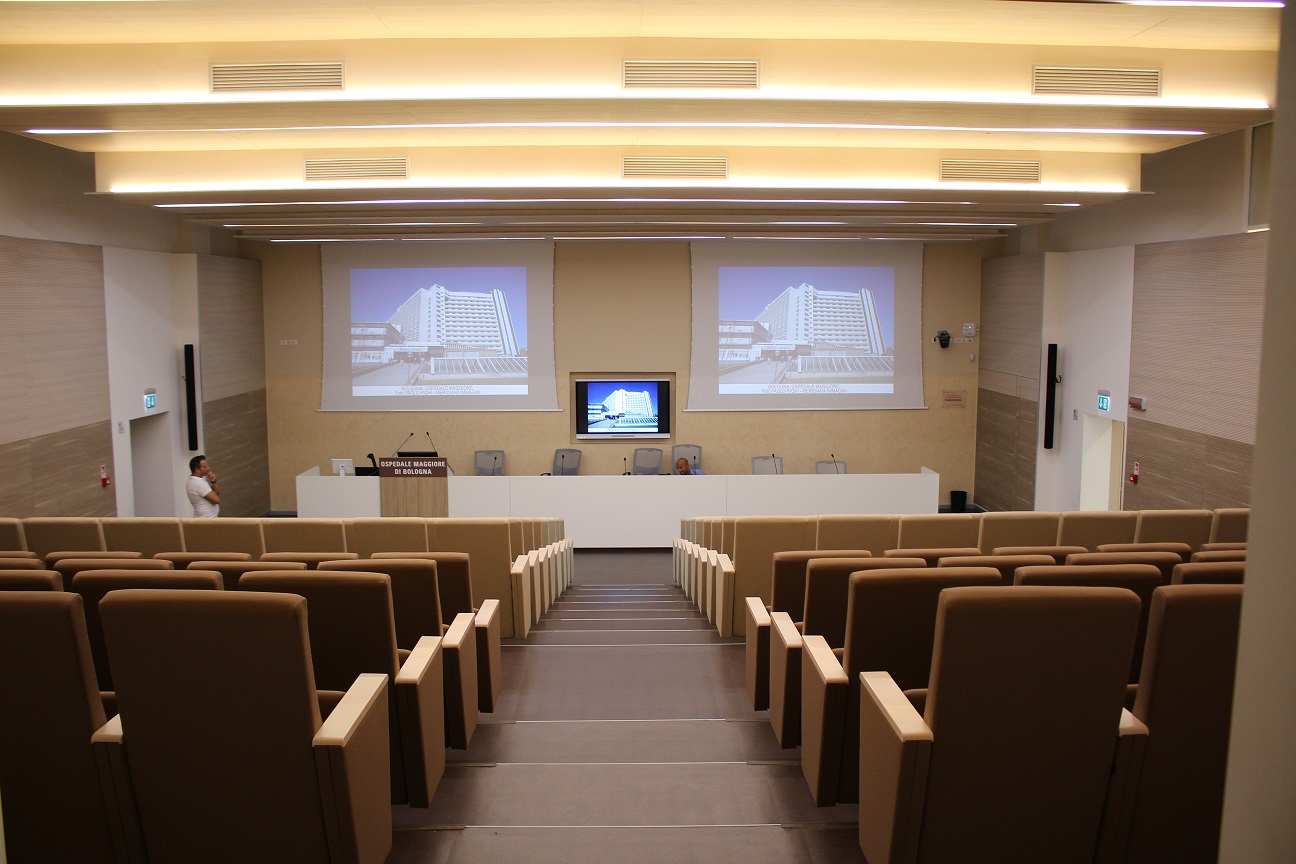 The Maggiore Hospital of Bologna is one of the most important health structures at a national level, consisting of three main buildings of 15 floors each, plus other smaller structures connected to each other. It houses numerous departments and more than 40 operating units, in addition to boasting the largest analysis laboratory in Italy, one of the largest in Europe, where over 18 million tests are performed every year. With such relevant characteristics, as you can imagine, this hospital is an important crossroads for patients, professionals and operators in the sector.

A new generation Aula Magna (Great Hall) has been built inside, capable of meeting various needs, from conferences to the organization of meetings of various kinds, up to the use of space for viewing video content in cinema mode.

To develop the project, Tagliabue Sistemi, a system integrator that has been operating in our sector for over 35 years, was chosen due to their focus on the creation of training rooms, conference rooms, control rooms, meeting rooms and video conferencing rooms. Corrado Tagliabue, co-owner of the company, accompanied us to the discovery of this installation, retracing the key points: "The development of this project came after the award of a public tender organized by the Bologna hospital. The need was to set up the room for the simple and immediate management of different sources and the use of video content in different formats. In fact, there are several video terminals in the Aula Magna, which can be used by calling into question only one matrix: the CORIOmatrix of tvONE. All with the possibility of starting the direct streaming of any meeting, as well as recording the various sessions in full for subsequent use."

Despite being a fairly classic design, the room shows all its flexibility in the way it is used with the deployment, according to the need, of two screens placed behind the speakers' table or of a single large projector screen, as well as a 65” touch monitor.

It is Corrado Tagliabue who explains how the various video terminals are used, retracing the steps: "Although it is a conference room that I would call classic, we wanted to accompany it fully to better face the organization of any meeting. The auditorium presents a conference system with the automatic pointing of the HD cameras towards the speakers' ta ble and towards the audience, for video shooting and video conferencing activities. On the podium, a system was set up to manage the interactivity of the presentations to be shared simultaneously with the touch monitor placed on the speakers' table and the 65" touch monitor, placed behind the speakers at the center of the front wall of the audience."

"Obviously - adds Corrado Tagliabue - projector screens could not be missing; given the need to share with the audience both the contents proposed locally and those managed remotely, the wall behind the speakers was equipped with two video terminals. This way, interaction with other speakers not present in the room is encouraged and the participants in the conference are facilitated in the contemporary vision of the contents or by the speaker connected by video conference." 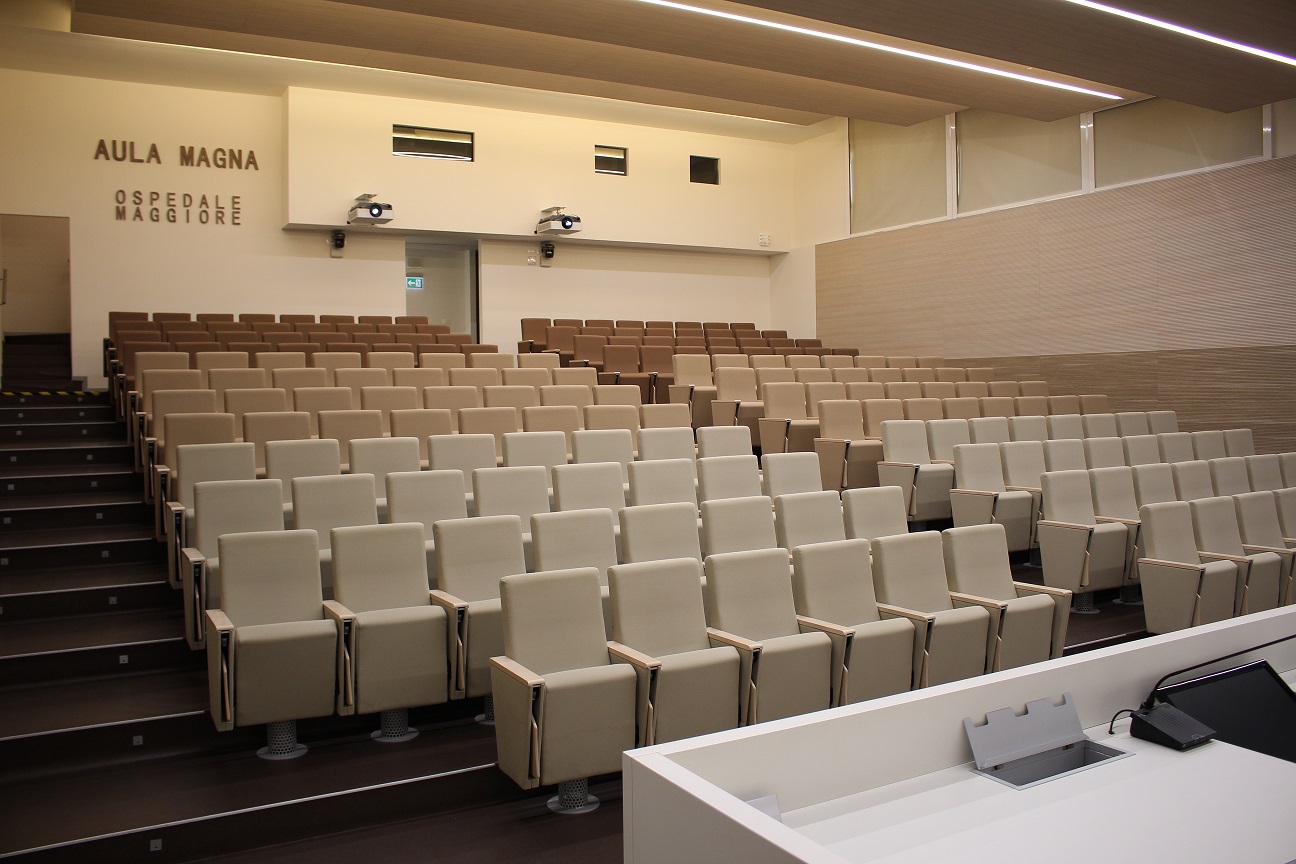 If on the one hand the two video terminals allow you to view different contents or speakers connected remotely, on the other the classic installation with a full-wall screen could not be missing.

A third central projector screen has also been set up, which is called into question for viewing 'cinema format' video content.

Corrado Tagliabue explains in detail how the two projectors installed and arranged to call one or two video terminals alternately work: "Given the size and lighting conditions of the room, we have chosen two identical projectors of 7,000 lumens each. In the case of simultaneous use of the two video terminals, the scenario sets the work of the projectors in dual video mode, each one takes care of its own content routed from different sources. Otherwise, if you decide to prepare the room for cinema mode, one of the two projectors is switched off and the motorized optics of the second projector covering the large central curtain is centered. Everything is managed with presets that, called into question, prepare monitors and video projectors according to needs."

A single CORIOmatrix: immediate management of many sources

The matrix would be the heart of the whole system, as a device capable of managing signals from different sources in a simple and immediate way, ideal for systems of this type.

This is the task of tvONE's CORIOmatrix, a universal modular matrix, based on exclusive CORIO®2 technology, equipped with universal inputs and an integrated scaler, capable of managing the flows and any type of conversion on the outputs as a conductor: Up, Down and Cross. More than a matrix, a real universal system that integrates the matrix functions with those of a scaler and graphic mixer was needed. The workload that was delivered included several devices to coordinate. Let's look specifically at how the signal traffic of this room is generated and managed. 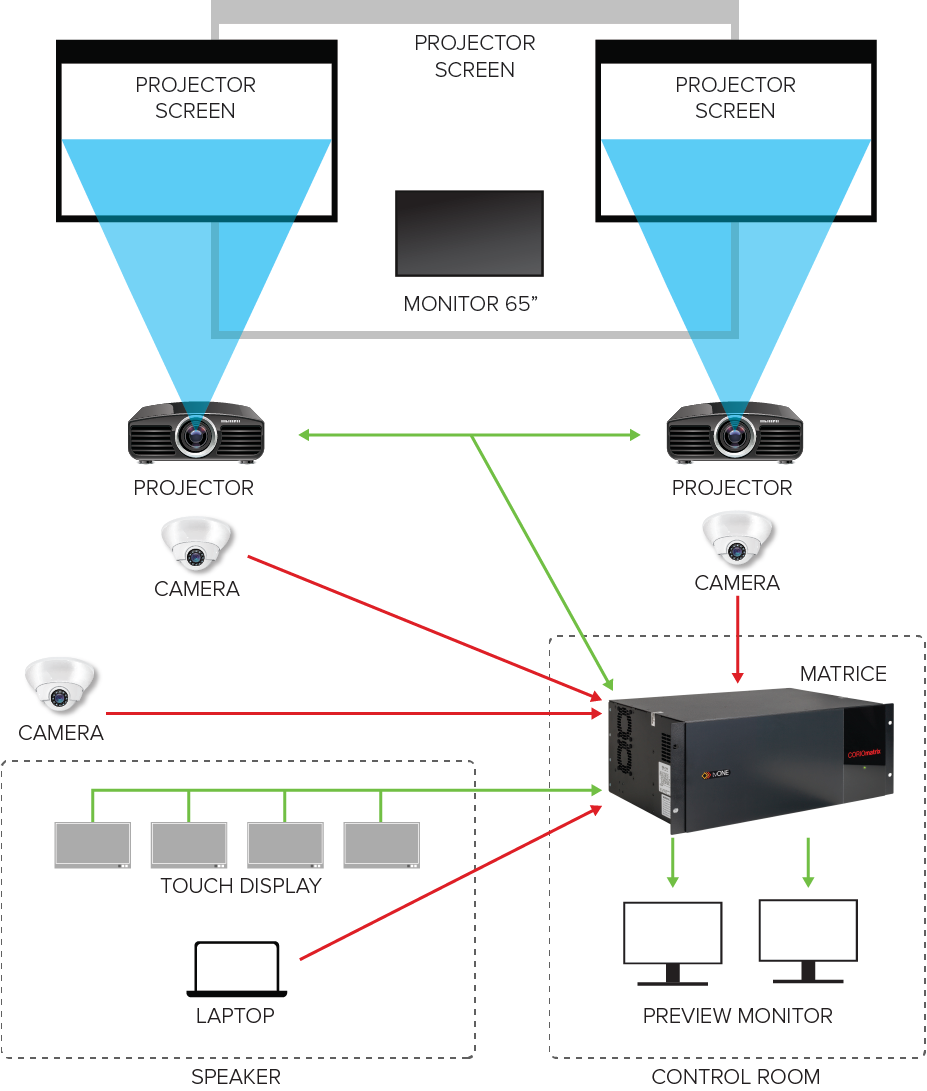 We start directly from the speakers' table, from which every professional can share their presentation: "We made it easy to share content - says Corredo Tagliabue - by providing 4 HDMI inputs and 4 VGA inputs for users who use their notebooks. Elements have been integrated into the furniture; these are cockpit boxes for multi-socket connectivity, produced by us, which allow different sockets useful for power and connectivity to be contained in a single module.

The speakers are also supported by the presence of three 22" monitors, in addition to the monitor installed in the music stand. Under the counter, stored in a suitably invisible way, all tvONE transmitters and receivers have been set up."

As specified at the beginning of the article, the signals from the three cameras also leave from the hall and flow directly into the CORIOmatrix.

Our journey to discover this installation leads to the control room, a spacious room adjacent to the auditorium, within which the coordination of what takes place during the conferences takes place. Here, in addition to three control stations, the technical cabinet was positioned.

The control room has been designed to always have visual contact with the interior of the auditorium, thanks to a separation window that allows you to see the speakers' table and part of the stalls. 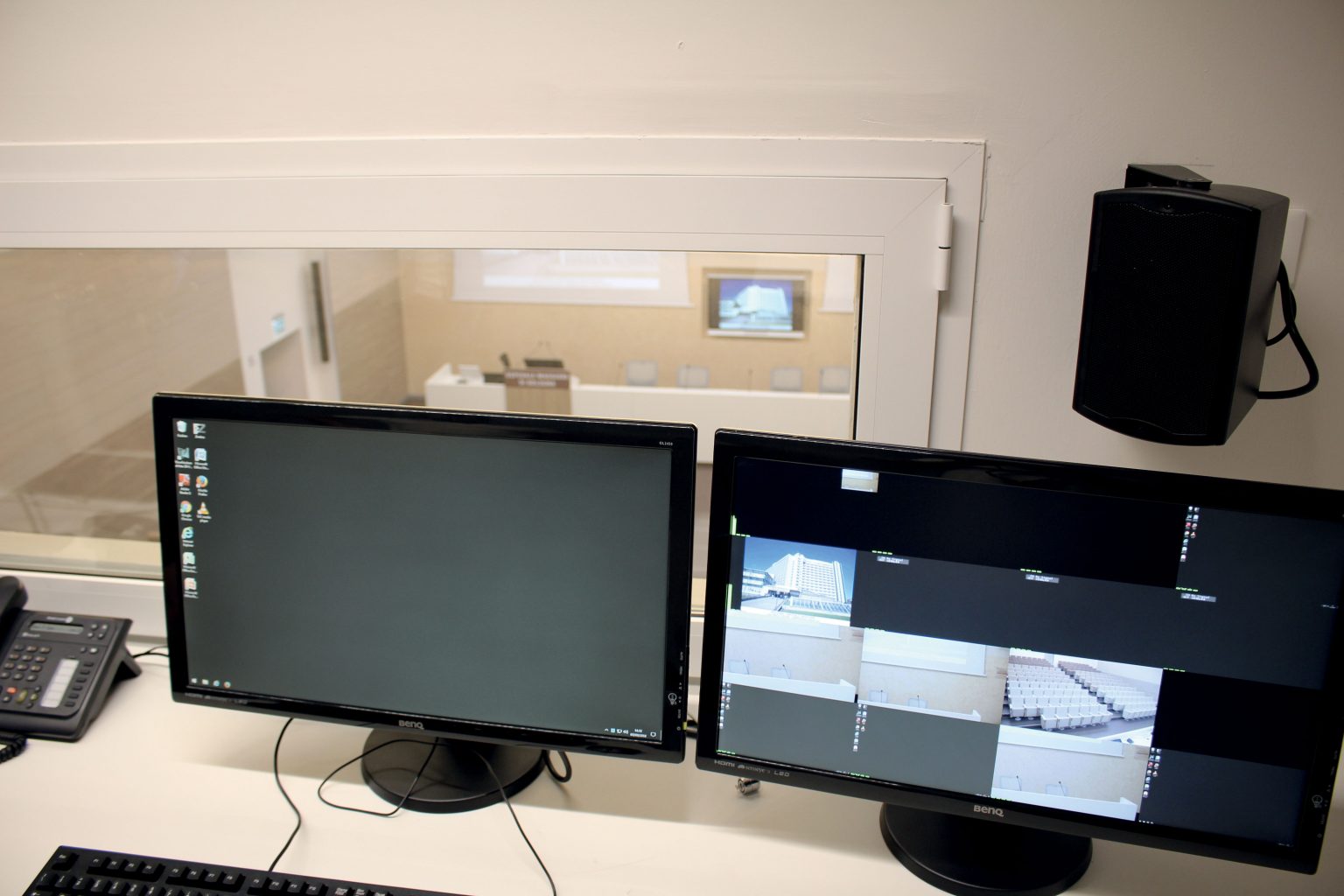 Three 24” monitors allow you to better manage the audio video signals, follow the progress of the work in perfect sync, as well as guarantee any streaming operations, thanks to an IP video conference apparatus with ISDN predisposition complete with MCU, which mixes and quickly streams media between connected users so they can join the conference.

By previewing on the control monitors it is possible to easily manage any content, whether it comes from the speakers' table or from the cameras or, not least, from remote connections. For an advanced system such as the one set up for the Aula Magna of the Maggiore Hospital of Bologna, the space and equipment needed to support conferences held in a foreign language could not be missing.

A simultaneous translation system has been set up for two workstations for interpreters, with two 22” monitors.

It is now essential to include the provision of a conference room with recording and streaming systems in a project, as happened at the Maggiore hospital: "We have provided a high-performance recording and streaming processor - confirms Corrado Tagliabue - which allows you to capture and distribute AV sources and presentations as live streaming or recording multimedia content. With high quality scaling and flexible double window processing we have allowed the combination of two input signals, to allow the configuration of two window display, for example 'picture-in-picture' and 'picture-by-picture'. The system allows you to record and at the same time broadcast streams." 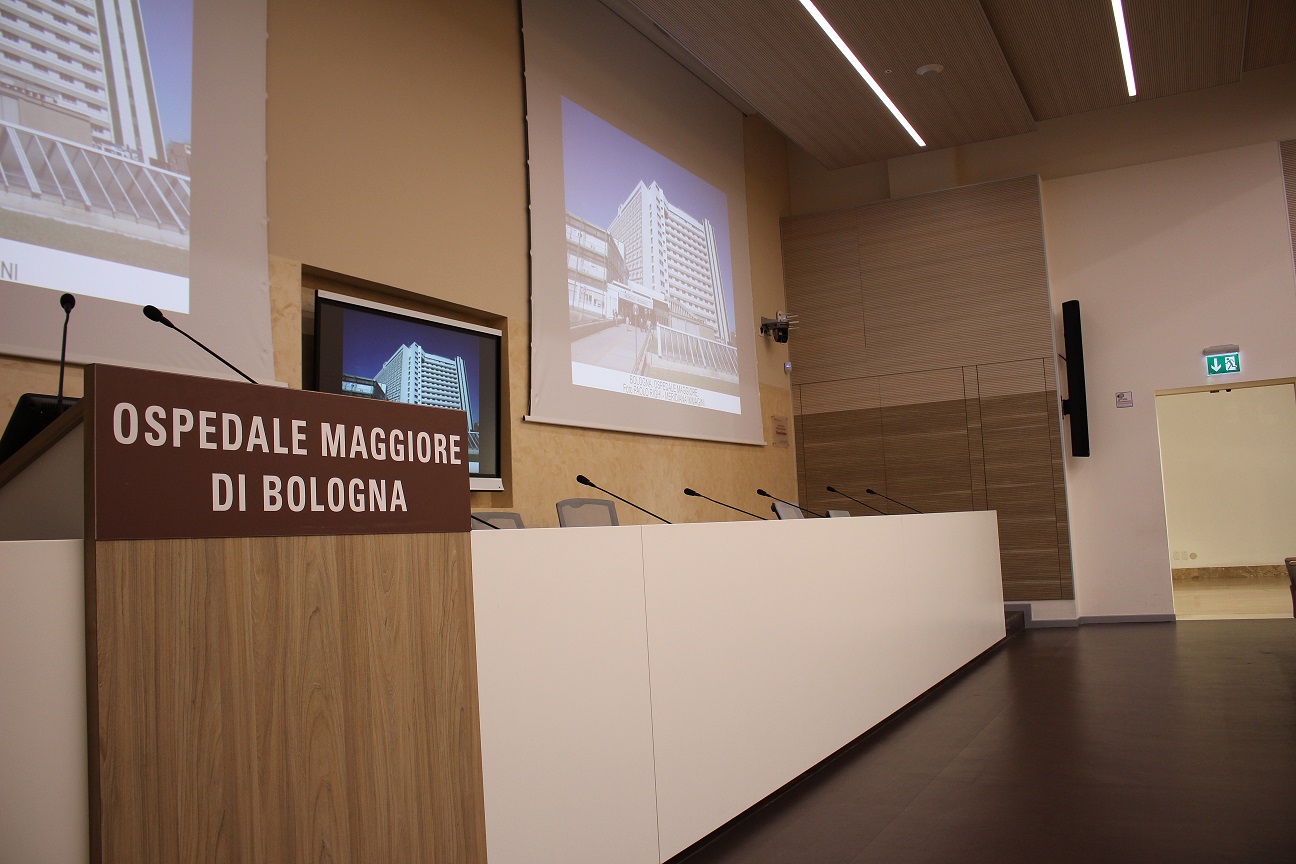 CORIOmatrix (C3-540) is a universal modular matrix, based on exclusive CORIO®2 technology. With a maximum of 64 inputs and as many universal outputs , this device can manage any input video format, analog or digital, with resolutions up to 2K, and is able to convert it into a specific format with a distinct resolution, on each output. In addition, CORIOmatrix is ​​able to configure up to 15 input modules (30 inputs) and up to 12 output modules (24 outputs). It is equipped with 16 slots to house the universal tvONE modules, 4 for the input modules, the other 12 bidirectional.

Enrico Borghesi is one of the Channel Managers of COMM-TEC Italia, an Italian distributor that has been present in the Italian market for two decades. Along with the Ing. Borghesi, the professionals of Tagliabue Systems have developed several projects, including the one related to the conference room of the hospital in Bologna.

When the need to design an environment with features such as the main classroom of the Maggiore Hospital was presented, I immediately identified the tvONE CORIOmatrix as a device to be inserted as the heart of the system.

"After a meeting at the offices of Tagliabue Systems, we laid the groundwork for the development of the ideal design for this room. Regardless of whether it's a classic convention hall, designing a video audio system for a hospital environment generates satisfaction. The need for the project was born from the need to manage many sources of different formats. The video sources, from cameras to content from the presenter's table, flow directly into the CORIOmatrix. It is a modular matrix with the multiviewer board that allows you to have the preview of all sources in directing and have all seamless switches without release.  All switchings are cut without loss of synchronicity."

"In addition  - concludes Enrico Borghesi - it is essential to use this type of matrix because of the scaling that allows to manage the various destinations that require different resolutions. From the CORIOmatrix, the signals are distributed to all these destinations: projectors, table monitors, motorized towels, preview screens present in the director's room, recording streamer, etc. Therefore, output to output, target by target, the CORIOmatrix returns the correct frequency and resolution required."

To view the orginial version of this article in Italian, click here.