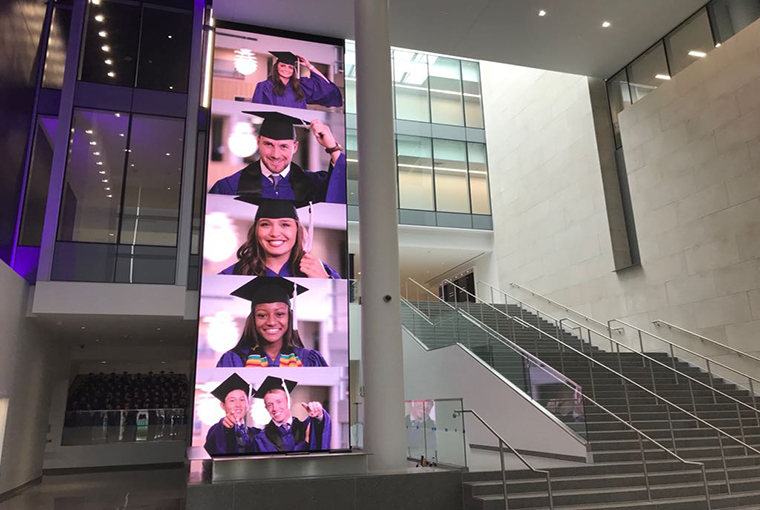 Northwestern University, located in Evanston, Illinois, with over 24,000 students and a founding member of the Big Ten Conference, wanted a new addition to their Walters Athletics Center in order to create an exciting attraction and environment for students, staff, and visitors. To achieve this, the university decided on a 3-story-tall, 40-foot vertical LED video wall to showcase student athlete videos and related content.

The giant 40-foot portrait video wall is 4605 pixels tall by 1344 pixels wide.  It is created by grouping the pixel tiles into four sections.  Each section is 1344x1344 pixels and controlled by its own LED wall processor.

The LED processors running the video wall are fed by the output of tvONE’s CORIOmaster.  CORIOmaster has four primary features:

The CORIOmaster takes the incoming video or stills and positions them over the four display outputs.  The inputs are 16x9 sources that can be 4K, UHD or 1080p HD signals.

In addition to tvONE’s CORIOmaster, the massive LED video wall is made possible with Primeview 2.5mm Classic LED tiles and the Primeview LED Control System. Combined, these products help the giant display come to life and provide an appealing and exciting visual to all who walk by.